Opportunities for Women in Construction: Career Paths from Office to Field

In marking International Women’s Day and Women in Construction Week, we talked with Jennifer Nishita and Mari Villanueva about their career path here at SC Builders and their advice to women in “office” roles on how to advance their career in construction.

At SC Builders we believe in both autonomy and fostering a mentoring culture. We’ve built a culture that empowers and challenges, so that we all thrive. Our people are given as much opportunity to grow as they can handle, and the authority and resources to grow themselves along with our business. That includes making the leap from an “office” role to a field role like Project Engineer or Project Manager.

Diversity of thought and talent benefits our projects, our team, and the entire construction industry. We encourage women who are currently in office support roles to consider the rewarding opportunities of working more directly on projects in the field. Jennifer and Mari have done just that!

After joining SC Builders in 2011 as a Project Administrator, Jenn Nishita worked to become Project Engineer and eventually earned a promotion to Project Manager. Mari Villanueva joined SC Builders in 2017 as Project Administrator, was promoted to Corporate Office Manager in 2019, and is currently transitioning to Project Engineer. They both are indispensable to any team they work on, and are helping SC Builders grow Strong, Smart, Unique, and Positive. 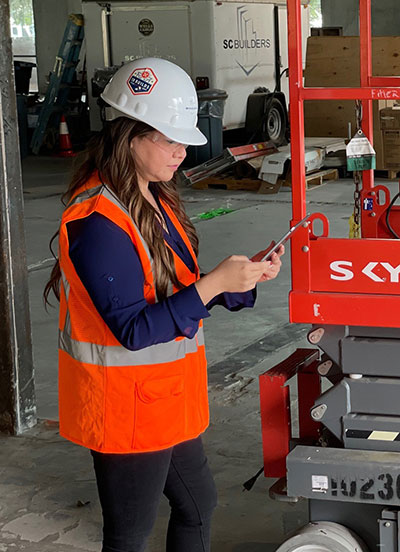 Why were you interested in working in a field role as a PE and PM?

I became interested in a PE role after spending time at the jobsite. I initially went to the jobsite to assist with drawing management, but there was always so much going on—I wanted to get involved. I also liked the collaborative approach of seeing everyone huddled up to come up with solutions when a problem arose. It wasn’t just one person figuring it out, it was a team effort.

The transition was fairly smooth. I started by visiting jobsites and taking on PE tasks until I could perform the role. By the time I was promoted, I was confident that I could meet the requirements.

How did your admin knowledge help in understanding and supporting projects?

Starting off as an admin was greatly beneficial to my role as a PE. I was already familiar with most of the subcontractors as well as the necessary paperwork to issue a contract. All project set ups also start with the admin staff so I was a step ahead of new PEs that were not aware of the information that needed to be requested. 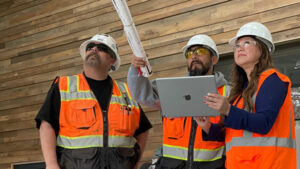 What kind of support did you get from SC Builders in your career interests?

I received a lot of support from SC Builders in my career goals. They gave me the opportunity to work as direct support to project engineers and managers which allowed me to gain experience performing the tasks that are required of an engineer. There were no limits set on me and I was able to learn every aspect of being a PE. This really set me up to be successful when I was officially promoted to the role.

SC Builders’ support also allowed me to progress even further after becoming a PE. I worked directly with the project managers to learn how to perform the tasks of that role, and eventually I was promoted to Project Manager. SC Builders has a flat structure that really allows you to learn and progress if you are willing to put the in the work.

What advice would you offer to women in an “office” role who would like to transition to a PE/PM role?

My advice is to really understand the work you are performing in your current role. If you are not sure what something is, ask someone. Starting off in the office allows you to get used to the scopes for contracts. You can start learning to read drawings and help track permits and drawings.

I also recommend observing how people in that current role handle issues that arise, and how they interact with the various team members. You can learn a lot just by watching. Most important: discuss your goal with your managers. If no one knows your goal, they can’t help you achieve it. 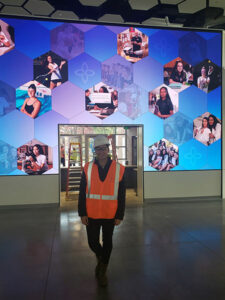 I wanted to learn more about the field side of the industry, and be a part of making the clients’ visions a reality.

It has been exciting to see how projects evolve, how change orders happen and the collaborative effort between owners, architects and us.

What kind of support did you get from SC Builders in your career interests?

It was encouraging to see how many people were supportive of me making this move, especially my current project team. They have been showing me the ropes during my first project.

What advice would you offer to women in an “office” role who would like to transition to a PE/PM role?

I made extra effort to learn the PE role while still doing my workload. I tried to visit or work from jobsites whenever possible, and I started attending seminars and networking events to meet others in our field.

During Women in Construction Week, we also asked our women builders for their thoughts on why they love construction and about the opportunities and fulfillment found in the industry.

All of these passionate builders are helping SC Builders grow Strong, Smart, Unique, and Positive. 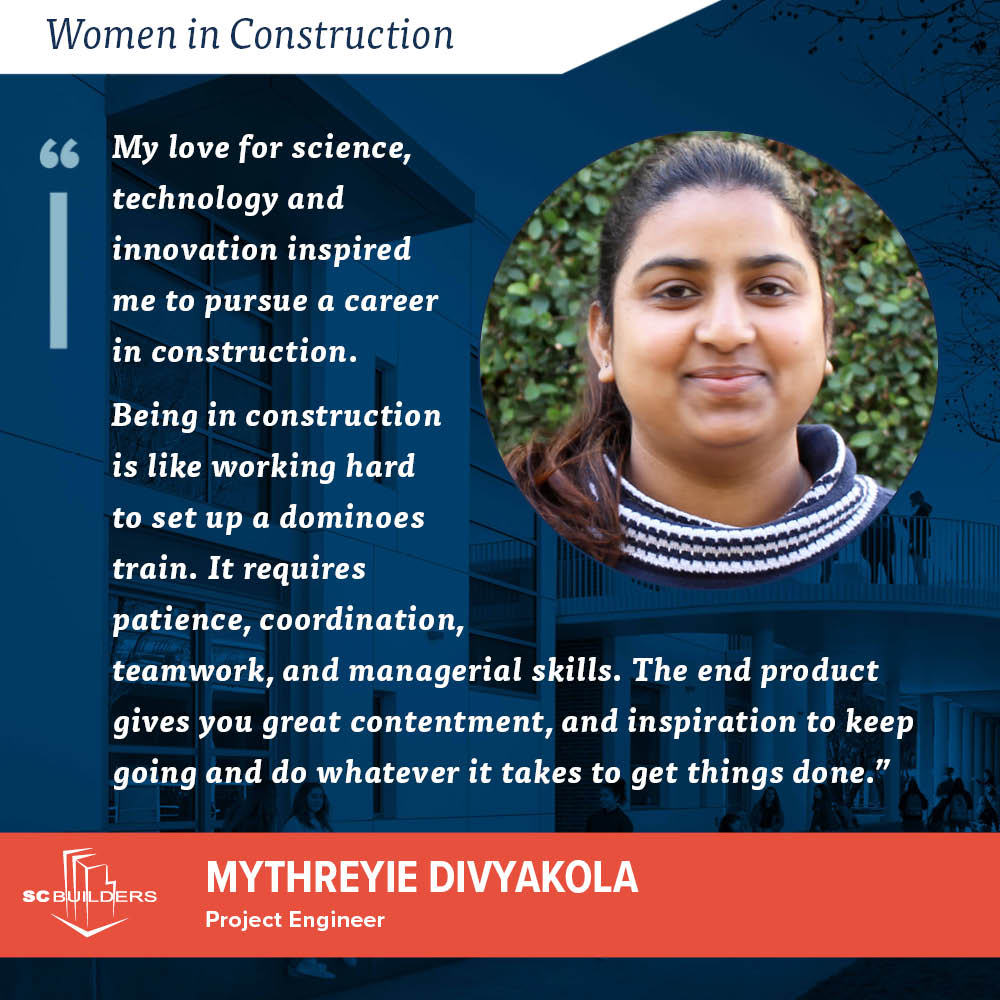 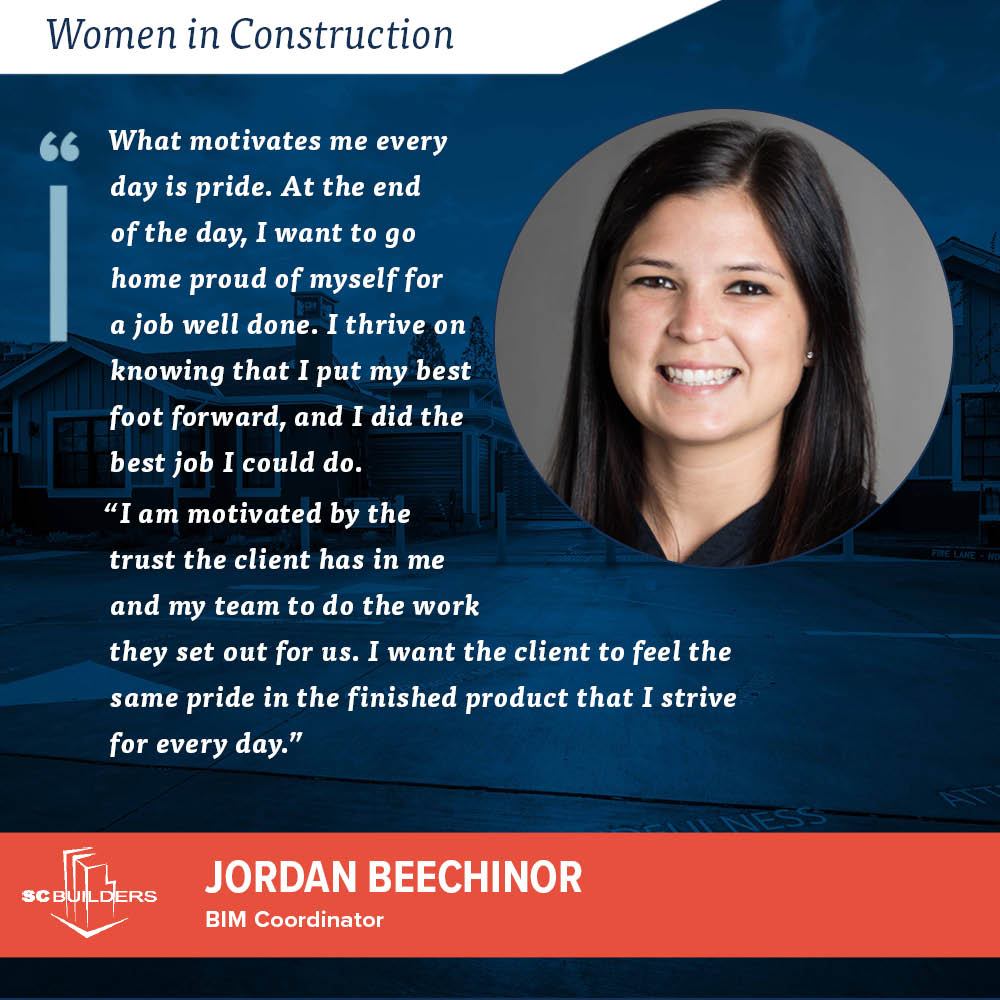 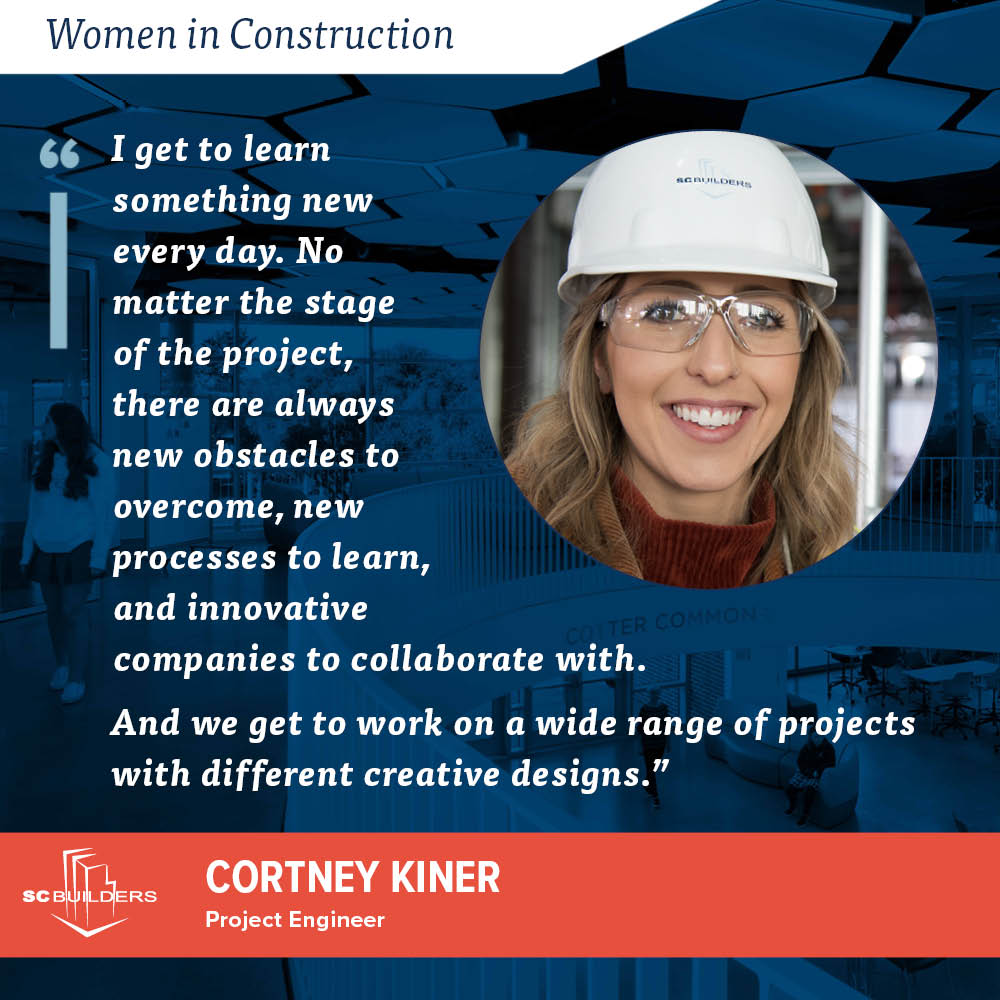 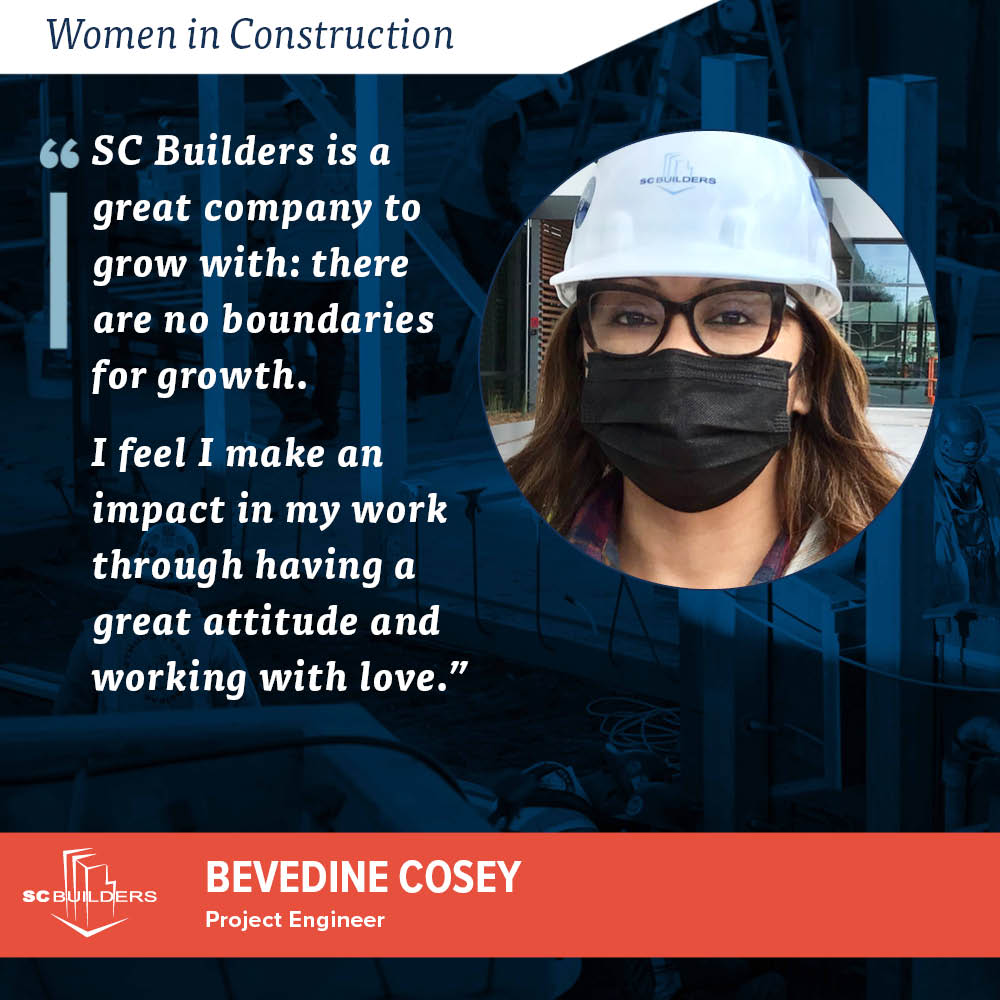 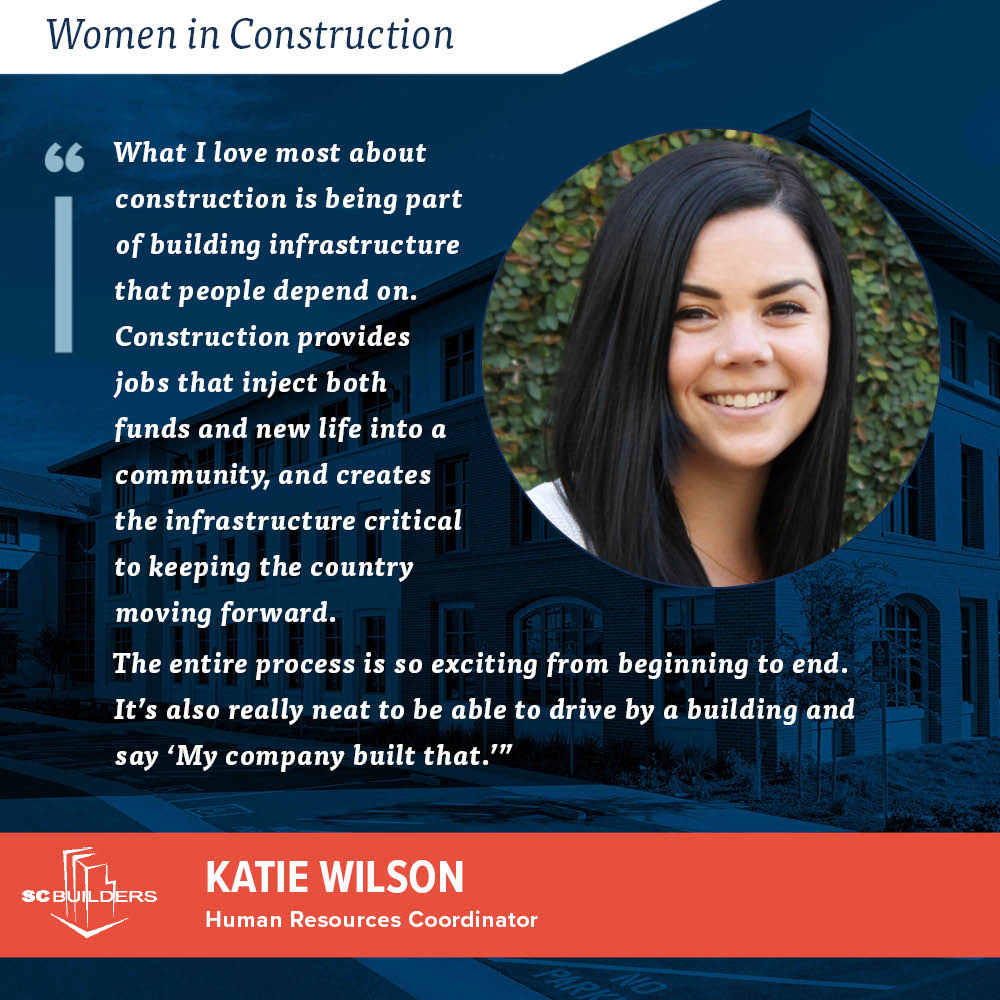 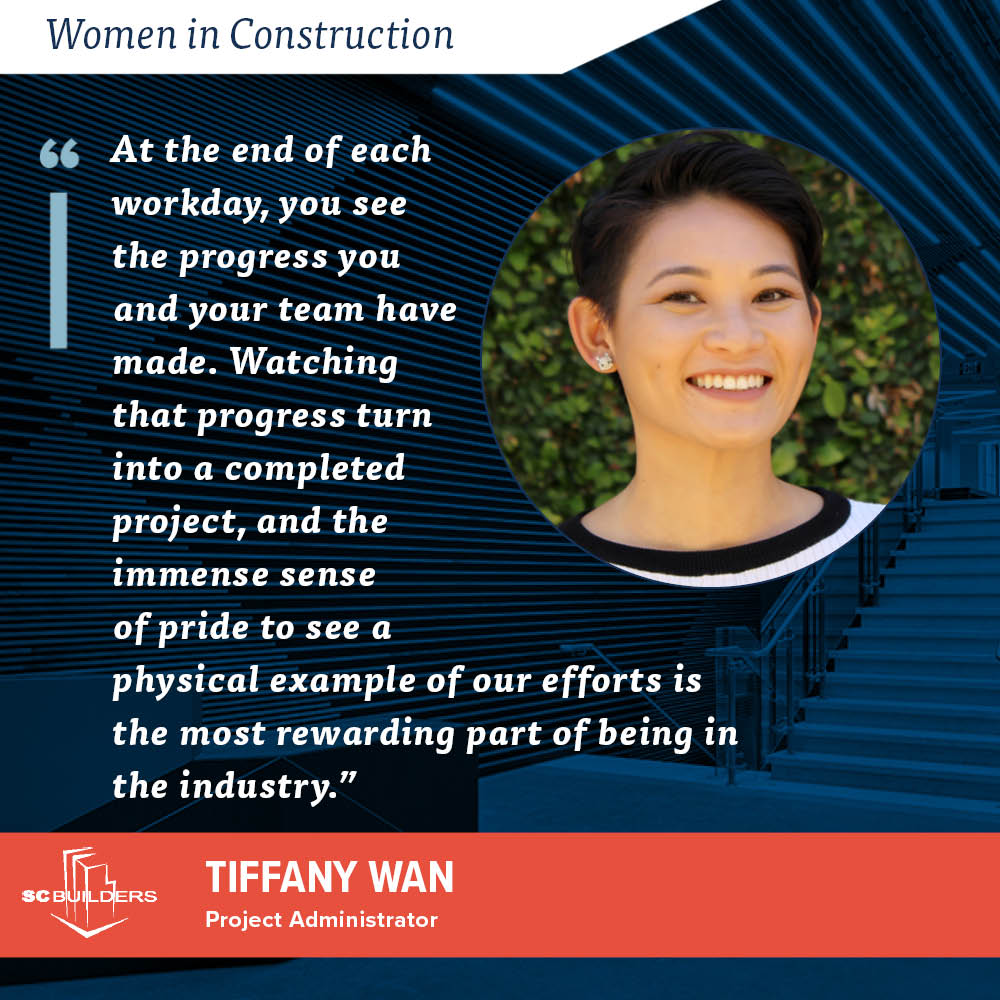 Learn more about careers at SC Builders in our careers section.

Check out our open positions here.